Act in haste, repent at leisure. The EU approach to migration and its management has proved to be mistaken, muddled and inadequate. Mainstream media has played its part in a near hysterical campaign to galvanize member states into reaction as the near endless stream of unfortunates turned into a flood, flowing out of a variety of countries. Naturally the focus has largely been on Syria’s ghastly civil war and its homeless victims, many of whom can no longer sustain themselves between the twin evils of ISIS and the Assad regime. The West’s response post Iraq, Libya and Afghanistan has been unsurprisingly meek and unimaginative: a mix of Special Forces’ activities, localized bombing and drone strikes. This is both a real civil war and a proxy one played out between Syrian factions, and  its role as a  client state of Russia, Iran and opposed by the Saudis and others. The policy failures are numerous and dire, some go back well beyond the Assad regime and the century old post-war settlements for Syria and Iraq: it is easy to criticize but these were disparate provinces under the Ottomans, so re-drawing maps was never going to be easy or fair to the mix of regions, and ethnicities.

We now know that the flow is made up of refugees from all parts, migrants from the Balkans, Eritrea, Libya and the Sahel. The only common factor is the desire to escape at near any cost. This is not entirely a new problem as the Italian coast guard knows – they have been fielding this problem for years as migrant boats have sunk or washed up on Lampedusa, Sicily and on the Greek Islands as the broken Greek (and EU) border system struggles to cope. Choke points have also existed in Menton and Calais (hardly recent). Europe, in the form of the EU is seen as a both a safe refuge and a chance to make a new start; it is also a source of a safety net in the shape of EU country benefits systems, which if they are to work require a serious degree of control. The EU’s much vaunted four freedoms,  of people, capital, goods and services are now becoming a ball and chain since they were designed for a different world, one where there was less impact from globalisation and mass movement. The EU is not a nation-state, no matter how many might have that aspiration and is unlikely to become one anytime soon. Nonetheless the President of the Commission, Jean-Claude Juncker has announced emergency measures which impose a compulsory quota scheme on its member states: this overrides national parliaments and has already produced a backlash in former Central Europe, Poland, Hungary, and the Czech and Slovak Republics. Many EU countries are already suffering high levels of youth unemployment, high debts and considerable economic pressures. True these may be nothing when compared to the suffering of the migrants, but they set up a potential clash of cultures. Reaction from Central Europe is unsurprising given an historical clash with the Ottoman Empire. There is likely to be little cultural cohesion, or comprehension in host countries. Most bizarre of all has been the reaction of Germany, which has committed to take some 800,000; at one level this is a simple re-balancing of an ageing population, in which case why not have an organized system to select those who can assimilate or have necessary skills. Or is its action an identity crisis driven by Germany’s problematic past? Whatever the motives and in part it has to be seen in providing some relief to the hard pressed Greeks and Italians, this sends a signal that Europe’s borders are open. Indeed they appear to be, since neither the Dublin Agreements nor Frontex systems provide an adequate external border system. Once inside there is a heartless and cynical movement between countries as migrants are allowed or encouraged to travel under the Schengen agreement- the free movement of people, (viewed as sacrosanct) to the country of choice. 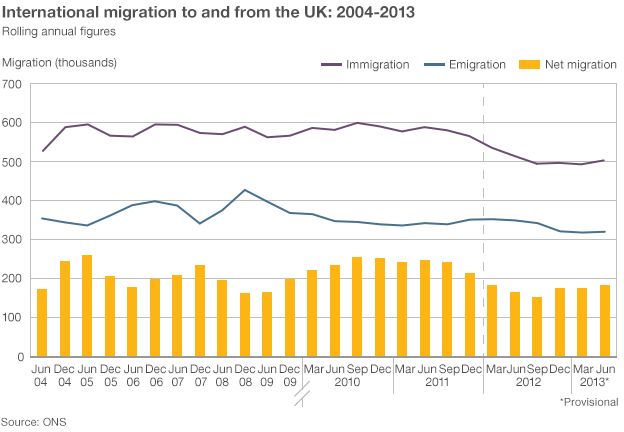 Courtesy of the BBC

This is a hopeless system and needs urgent overhaul. Britain, so long a major contributor via foreign aid has been pilloried for failing to commit to take more. This is to ignore the net economic migration from both non EU and EU sources over the last ten years, which is well over three million. This too is unsustainable. The perception is that Britain is both contrary and mean-minded, neither is true as the generosity of Britons to nearly any natural catastrophe testifies. Cameron is right to stress that this is a crisis that demands engagement of the head and the heart. It will be hard to maintain a semblance of EU unity if it remains rule by diktat.